“The unifying idea is surviving girlhood, reaching adulthood, intact. Along the way, we probe the deep questions of why we’re here and why we die.” 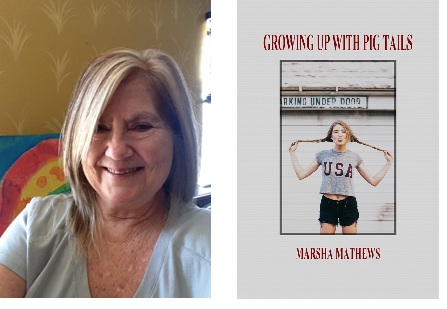 Growing Up with Pigtails (Aldrich Press, 2016)

Could you share a poem from Growing Up with Pigtails that is representative or could serve as an introduction for your chapbook?

Grandmother stands beside me
in front of the bedroom mirror,
the fingers of her left hand
touching my neck.

She brushes my hair
so gently
I do not feel the bristles.
She sets the brush down.

She begins to braid
one strand over another
then under a third,
again, again,
until they knit into one
thick bind.

The glass reflects her
composed smile
but not its intensity
nor the warmth
she weaves.

What about this poem made you choose it?

With the first stanza of “Interlacing,” the reader may be unsure about those fingers on the girl’s neck. Is this grandmother angry? Why is her hand so close? As the poem continues, the tone becomes clearly tender. Because my chapbook presents a range of complex emotions that accompany growing up female, I thought this one an apt representation.

Furthermore, “Interlacing” with its subject of hair-braiding, conjures the chapbook’s title, Growing Up with Pigtails. The book interlaces poems of adolescence, into early young adulthood, portraying its struggles and triumphs.

Does the chapbook draw on your autobiography?

I attempt to convey truth of experience and observation. When writing a poem or short fiction, I draw on stories from my own life and stories that have been told me by others. I work hard to craft an event, an image, or an idea into a written piece that will sing to others. There is always a piece of me in my work though not every narrator is literally me. Don’t let the first-person narration fool you! The poet and narrator are not the same, except maybe in the case of Emily Dickinson or Anna Akhmatova.

My poem, “Around and Around We Go, Turtle Hunting at Lake Oxbow,” for instance, began more rooted in autobiography than what appears in the chap. Because it was my brother and I who hunted turtles, the poem originally conveyed a brother. However, in examining the poem in relationship to others in the chapbook, I realized that because no other references were made to a brother, the poem might benefit from a modification, changing the brother to the sister the reader meets in “Camping at Horseshow Beach.” By the way, Growing Up with Pigtails is dedicated to my sister, Nan.

In an earlier interview with Speaking of Marvels, you said that chapbooks tend to be more accessible when unified by an idea. What would you say the unifying idea of Growing Up with Pigtails is?

The unifying idea is surviving girlhood, reaching adulthood, in-tact. Along the way, we probe the deep questions of why we’re here and why we die. Both marvelous situations and those that shock of betrayal shape us into maturity, and similarly, shape this chapbook.

You say in the dedication that Growing Up with Pigtails is “For the young and the young at heart.” Did you set out to write these poems for a specific audience, or did you find out who it was for after writing them?

These poems were written over a span of 30 years, plus! Some were written when I was a graduate student at Florida State University in the 1980s. The more recent poems, “Snowy Road Back to Sandy Ridge, Virginia” and “Old Man Duff Goes Out Teaching”

are conspicuously different in style, being prose poems, but they reflect the theme of growing up. I am hopeful these poems will appeal to young people as they, too, confront the highs and lows, the many moral dilemmas of coming of age and settling into adulthood. I am equally hopeful that older adults will also enjoy reading my book, reminding them of their own personal transitions. I suppose when I decided to pull these poems into a book, I thought about the words of one of my writing professors at Florida State University. He said he was tired of reading so many books and manuscripts about what it’s like to grow up as a guy. “What’s really needed,” he said, “are books about growing up female. Now that, I’d finding interesting!”

You chose to change the titles of a few poems that had been published previously for Growing Up with Pigtails. Does that change the meanings of the poems, or serve a different purpose?

Sometimes title changes are made to fit the integration of poems into book form. The very action of placing a poem into a book brings a slightly different slant to the poem.

Each poem may stand alone, but each also, to a degree, is shaped by the poems it appears alongside.

The beginning poems of the chapbook are seemingly about a father, next a mother, then a sister, then a grandmother. Are they part of the same family?

I have braided together poems that relate to the theme of growing up female. The book takes more the structure of a collage than a report or autobiography. The reader should not expect chronological order or too much in the way of poem-to-poem linkage. This is a small collection of individual poems that relate to one another through a coming-of-age theme.

There seems to be a focus on a few different places in your chapbook—Florida, Virginia, Georgia. What made you choose those locations?

My life’s journey has carried me to live in various states in the South. My first chapbook, Northbound Single-Lane, (Finishing Line Press), presents a woman who leaves all she knows behind, as her marriage ends. She moves north from Florida, to raise her two young daughters.

The poems of Growing Up with Pigtails emerged while I lived in those locations. However, for the last fifteen years, I have lived in Dalton, Georgia where I teach English at Dalton State College.

What aspects of the South do you address in your chapbook?

Having always lived in the South, (if one considers Florida part of the equation, which, interestingly, many do not), I find this question difficult. It’s not easy to see the South when you live it every day. I have traveled outside of the South and have studied Southern Literature, so I could do a little guesswork, but I think this question is better left to the readers to determine.

The poem “Reporting Calhoun, Georgia” feels like a turn in the chapbook. Could you tell us more about the poem?

Your sense of a pivotal moment probably relates to a greater maturity expressed in this poem. The formation of an interest in politics and fundamental beliefs in freedom and what it means to protest, defend, and advance freedom are ideas with which young adults struggle.

By presenting a poem with an “it’s [war’s] got nothing to do with me” attitude, my aim was satire. The U.S. involvement in The Gulf War of 1990 and subsequent war against Iraq, 2003-2011, were reported in the news daily, yet I noticed many of my students, unless they personally had a family member or friend involved, didn’t want to think about war. At the time, I wanted to write a poem to shake them awake. The gruesome image of the boy being crushed is real. The apathy is real, too.

Are there any writers or teachers that inspired you to pursue writing?

Marsha Mathews is a poet and Professor of English at Dalton State College, in Dalton, Georgia. Her new book, Growing Up with Pigtails, presents both narrative and lyrical reflections on that sometimes troubling, sometimes triumphant experience of growing up, girl. Earlier books include Hallelujah Voices (Aldrich, 2012), Sunglow & a Tuft of Nottingham Lace, Red Berry Editions 2011 Chapbook Winner, and Northbound Single-Lane, (Finishing Line, 2010). A recipient of the Orlando Prize (AROHO) for Flash Fiction, Marsha has published her work in periodicals, such as Appalachian Heritage, Broad River Review, Greensboro Review, The Los Angeles Review, Pembroke Magazine, Raleigh Review, and anthologies, such as Literature Today.

Marsha’s books may be purchased for a modest sum at www.amazon.com