“I feel strongly that we’re constantly working toward completion, and our broken relationships and struggles are part of that journey.” 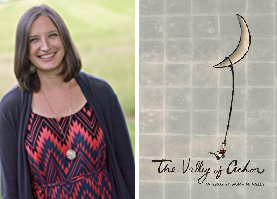 Are you shy about sharing your work with your family and friends?

Not as much as I used to be, although there are some pieces that make me feel more nervous or vulnerable, depending on the content.

Do you have an all-time favorite book?

That’s tough to choose! I don’t think I do have a favorite book but some of my favorite authors are C.S. Lewis, William Faulkner, and Brian Doyle.

If you could try writing in one new genre, what would it be?

I think it could be fun to tinker in long-form fiction, but I’m not sure if I have the imagination for it.

Is there a classic book that drives you crazy?

The Great Gatsby. I don’t understand the draw.

Why did you choose the title, The Valley of Achor? I researched the valley, and Scripture describes it as a place transformed from despair to hope. Does this parallel your personal journey? I also noticed an interesting connection between the title and the literal valleys described in your book, whether it be the valley Mike describes as separating humans from God or the valleys you jump into with Eric. Was that connection intentional?

Yes it was! I connected with the book of Hosea’s narrative of leaving and returning to God the way a wayward wife leaves a faithful husband for other lovers, and the idea that God can turn valleys of despair into doors of hope. There were many times during that season of my life in which I felt despair, and yet God turned them into gateways of hope.

I have had my fair share of doubts about God, guilt over going too far with a boy, obsession with securing a boy’s love, long-distance relationships, etc., so I really appreciated your vulnerability. I was able to learn about my own life through your description of your own. Was there a scene from The Valley of Achor that was especially challenging for you to write?

This long essay was my first real attempt to write about my faith in a way that didn’t judge the girl who believed and struggled so earnestly throughout college. With so much distance between the narrator and the character Sarah, I found it challenging to write objectively about my faith experience without undercutting what I really felt during those moments. So nearly any time I attempted to explain a spiritual moment I felt, it was difficult. I had to keep resisting interpreting the scene for the reader and just let it stand.

The dialogue in your book reads so naturally. I could hear Eric saying, “I just don’t love you anymore . . . Maybe in six months, or a year, maybe then I will feel different,” as though I was sitting across from him while he spoke. Do you have any tips for writing authentic dialogue?

Less is more. In nonfiction it’s especially challenging to direct quote people because those are words the writer is saying that character actually said. Some writers are more careful about this than others. For me, that particular line of dialogue I remember so well because it was such a critical moment, I felt right using it – I am confident that’s something Eric actually said. If you try to recreate a full conversation in written dialogue, it would be an exhausting transcript, so preserve the quotes for the phrases that advance your story along – dialogue should provide movement and action.

I was intrigued by your use of statistics, specifically in the section following your jump into the valley. Why did you choose to weave scientific statistics into the narrative?

I think the physical world leans in beautifully to balance out the emotional and spiritual worlds. When I discover that the easy metaphor also carries with it a harmony of scientific fact, it deepens the extended metaphor and intrigues both the rational side of my mind and the emotional. I like that kind of thing. I also love to explore the world, to see how, like a hormone-fueled teenager, the moon can swing erratic-like on its orbit. There’s so much to know about the world, and it brings all things into relationship.

Orbits and all the tremendous processes of space are certainly a theme in your book. Was this intentional? If so, how did it inform your writing?

It sure was, but it was an evolving extended metaphor. As I dug into the some of the scientific facts it informed the way I crafted scenes and when I chose to pursue the physical world over the spiritual.

As a writing student, I really appreciated your specificity. When describing Eric, you write about “the boat on Lake Erie, the golf course, the talk about Margaritaville, all mixed up in the Jamaica-Me-Crazy fruit smoothie he brought from the local gas station, blended with his dirt-caked boots, his love of the earth, his casual sense of humor,” and I instantly get a vivid picture of this boy I have never seen. Was it difficult to portray events from years ago with such a high level of detail?

I have a strong memory for moments and a weak memory for the names of things, so to conjure up memories from this time of my life isn’t so difficult. However, I did spend a lot of time digging back through old journals to fact check, since I’m so bad at dates, names, locations, and general facts. There were a few times when that digging really contradicted what it was I thought I knew.

You manage to interject serious emotion into your writing, but keep it well-crafted and effective. For example, you write, “I let him touch me, shock me, rescue me, pay for me, carry me, then leave me and say we were just friends, and then be in me, with me, then leave me finally, fall out of love with me.” Was it difficult to control your writing since the subject matter is so personal?

It was challenging, yes – it took a lot of practice to be able to write separate enough from my emotional and personal processing of that season and to let the editor/writer side of me step in to shape the narrative in a way that wasn’t just me spilling my guts on the page. Because trust me, there was plenty of that throughout the time prior to writing this essay!

The many elements of space were the most obvious themes I noticed, but the theme of water was a close second. In one of my favorite lines you write, “I did not find in Eric a vessel ready for filling, but I poured anyway, poured and poured, water splashing on the floor and trickling in between the cracks it found in our foundation.” I love this image, because, if no one stops it, water will just keep rushing and rushing. I think that’s a perfect description of your attempt to “fill” Eric. Can you tell me a bit more about the theme of water in your book?

Water is such an easy metaphor for me – I adore it. It’s present in so many spiritual and religious allusions, carries so much scientific weight, and was almost ever-present in the reality of our relationship, whether it was Lake Erie or the ocean or this aspiration for Margaritaville or a spiritual desire to be washed clean and purified. I think I was lucky to have in water such a reliable metaphor, given its presence in so much of my relationship with Eric.

Why did you decide to include the section about your present life at the end of the book?

I chose to end with my present day because I think so often in life we assume that the deep and impactful relationships we had in early years don’t have reverberations throughout our lives, but they do, even if we never speak to those people again. I wanted to make space for that relationship’s impact (positive and negative) still, here in my present day, because it’s part of my narrative and part of my marriage, and part of my faith. I think I wanted to honor that period of my life a little bit still, and to not tie a pretty bow on the end of the essay as if “I was lost but now I’m found”… I feel strongly that we’re constantly working toward completion, and our broken relationships and struggles are part of that journey. Eric is still a part of my journey, even though I haven’t spoken to him in over a decade.

Sarah M. Wells is an author, poet, essayist and blogger. She serves as director of content marketing for Spire Advertising and co-editor of the weekly column Beautiful Things, published by River Teeth. She is married to Brandon and together they have three children, Lydia, Elvis, and Henry.