“That’s my sense of life in this world: toggling between sacred and profane, between faith and doubt, between love and unrequited love.” 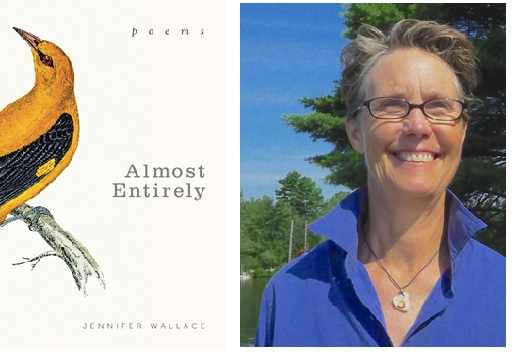 Could you share with us a representative or pivotal poem from your book? Perhaps a poem that introduces the work of the book, or one that invites the reader into the world of the book?

“Carruth” is the introductory poem and one of two that captures my sense of the “project” of these poems. In addition to the appeal of Hayden Carruth’s statement (in his 86th year) of being “almost entirely love,” I like the notion of “entirely” modified by “almost.” That’s my sense of life in this world: toggling between sacred and profane, between faith and doubt, between love and unrequited love.

What obsessions led you to write your book?

I am the kind of poet who writes poems when they arrive. I am not good at writing with a pre-determined “aboutness.” When I have enough poems, I call it a book… and look, then, for the themes/subjects that the individual poems might have in common. As this emerges, I might revise poems into those themes or, more usually, will write new poems to fill out the first batch.

What’s the oldest piece in your book? Or can you name one poem that catalyzed or inspired the rest of the book? What do you remember about writing it?

“Becoming an Impressionist” is the oldest poem that, rather than catalyst, seemed like satellite. I never thought it was part of the collection of newer work. But when the book started to come together and I started to notice my love of the image, the photographic, and my love of Rilke…his sort of empathetic imagination, I realized that this aspect underlies many poems regardless of varying subject matter. And so I suggested that we include this one.

How did you decide on the arrangement and title of your book?

The title comes from a poem by my first favorite poet, Hayden Carruth. He wrote in his poem, “Testament,” (at age 86) –“Now I am almost entirely love.” I was so struck by that idea and wrote a poem in response. It is the leading poem in the book. The phrase, “almost entirely” captures the toggle between faith and uncertainty that exists within and among the poems in the book. As for arrangement, my wonderful editor at Paraclete (Mark Burrows) loved the idea of sections and made an initial grouping. I noticed a pattern in each section and tweaked his version a bit based on that noticing: Poems overtly engaging with faith and doubt; Poems involved with puzzlement and mystery; Poems rooted in place and several short poems excerpted from One Hundred Footsteps [an artist book collaboration I did with Katherine Kavanaugh in 2011].

Which poem in your book has the most meaningful back story to you? What’s the back story?

It would have to be “I Don’t Like People. Animals, too, are an Imposition.” I was working that particular summer with letting more of a speaking voice into my poems and with that came my crabbiness. It’s the first poem that I allowed to remain uncensored in its own distasteful behaviors. Some of it is fiction, but the emotions are not fiction. I also would pick “The Wind of God” because it’s one of the first where I publicly opened to faith issues as subjects for my poems.

Which poem is the “misfit” in your collection and why?

Great question! I think “Hammerhead” (an older poem) feels out of place…but maybe not…though it is uncharacteristically narrative, once we found the grouping “poems rooted in place,” it made more sense. And I love everything about water, boats and fish.

What were you listening to when you wrote these poems?

I don’t listen to music when I write because it disturbs the rhythms of language. But the most inspirational music for me as a writer is pianist Keith Jarrett’s improvisational work (1975), Köln Concert.

What was the final poem you wrote or significantly revised for the book, and how did that affect your sense that the book was complete?

“Triton,” “Urine of Cows Fed on Mango Leaves,” “Prayer.” These 3 poems were late additions. I had a complete book (both Mark Burrows, my Paraclete editor, and I thought so); but I was writing new work and we realized that some of it fit well.

Did you read straight through your book out loud during the revision process or while finalizing revisions?

I do read individual poems out loud…obsessively so. But not straight through. My way of reading poetry books is to hop around at first and then read again from cover to cover. So maybe my writing/revising methods follow that.

Describe your writing practice or process for your book. Do you have a favorite prompt or revision strategy? What is it?

I think I am a reading writer. I sit at my desk or armchair or under a tree and read poems or nonfiction. Somehow a word or phrase will catch me and I am in the zone. I need a lot of inner space to write poems, but editing comes easily and even in noisy (emotionally and physically noisy) places.

What has the editorial and production experience with the press who picked up your book been like? To what degree did you collaborate on the cover image and design of your book?

Working with the Paraclete team has been a dream. I couldn’t ask for a more engaged and supportive editor than Mark Burrows. The marketing folks are supremely organized and have bumped me up a notch as far as publicity goes. I did not collaborate on the cover image, but I love it. They really achieved a good integration of image with content.

Is there a question you wish you would have been asked about your book? How would you answer it?

Can you describe your process for revising a poem? Oooh, that’s a long answer. I listen for the music of thought–the shape of thought as enacted by the poem’s form. It might take a lot of tiny structural adjustments to reveal that the basic architecture needs overhauling. I pay a lot of attention to sounds and line endings and I always try to eliminate prepositional phrases and adverbs (I think they are indicators that the line might be slack–to use Theodore Roethke’s term).

I am reading Ann Carson’s collection of chapbooks, boxed under the title: Float. Carson’s work is strange and challenging, but I like that it pushes me to think about new forms—which I almost never adopt as my own. I like also the slimmer volumes of poems by Jean Valentine, especially Lucy. And any of the beautiful, crafted chapbooks put out at the Center for Book Arts in New York

I am working on another book, a poetry/essay collection of laments and benedictions…meditative works that take a “long, loving look at the real.” (Jesuit theologian Walter Burghardt)

If you could choose another artistic path (painting, music, dance, etc.) what would it be and why?

I wish I had the hand/eye coordination to be a visual artist. And I wish I had the gene to play music (I do play the ukulele, but badly). I am a photographer, though…lately dedicated to photos of birds. There are a few on my website.

What do you wish you had been told as a writer? What wisdom have you arrived at?

I had a terrific set of mentors and friends who still read my work in early stages. I can say that nothing is missing from their encouragement, which boils down to: “Believe in your work.” Lately I am aware that the best medicine is not to rush the creative process. One friend said this about some new poems I am working on: There is the way that I have very little to say, though–I don’t see many problems with or have questions about the poems -as -poems.  I think the further work that will happen is with those real questions that are the themes of the poems–And those are questions that are very much on your mind (some of them on others’ minds)–I’m sure that work, thinking is going on for you.  I am interested in what you have to say on the questions.

Whose work helped you in the writing of this book? What inspires you? What gets you to the page?

I was under the influence of the photographer Henri Cartier-Bresson and his thoughts on “the decisive moment.” I was also influenced by my colleagues at the Maryland Institute College of Art and by my two sons; both are talented artists and one is a writer. I want my work to be as emotionally resonant as theirs and as beautiful (in form and complexity of feeling). Oh, and birds, and God, of course…the master creator role model and ground of my being.

What do you do for fun? Who are your favorite musicians and/or visual artists?

Jennifer Wallace teaches at the Maryland Institute College of Art in Baltimore, MD. She is a poetry editor at The Cortland Review. Her poems, essays and photographs have appeared in artists books, exhibition catalogs, galleries, museums, anthologies and literary journals. Her fourth book, The Want Fire, was published by Passager Books in 2015. A new collection is forthcoming from Paraclete Press in 2017.