“My favorite little books are in some way about littleness: brevity, children, small fetish objects. I’m charmed when poets pick up thematically on the compactness of the chapbook.”

How do you decorate your writing space?

I write in all kinds of spaces, but my home office faces House Mountain, and its changeableness is riveting. The slopes can change color from minute to minute, especially in the morning, when they reflect sunrise. The view starts with an ordinary street, and the mountain is crisscrossed by electrical wires, but the landscape transcends it all. So while I’ve decorated my writing space with a haiku calendar, some shed antlers I found in a park, and lots of prints and books, the mountain steals the show.

With thanks to Thrush, the journal where it first appeared, here’s “Absentation”: 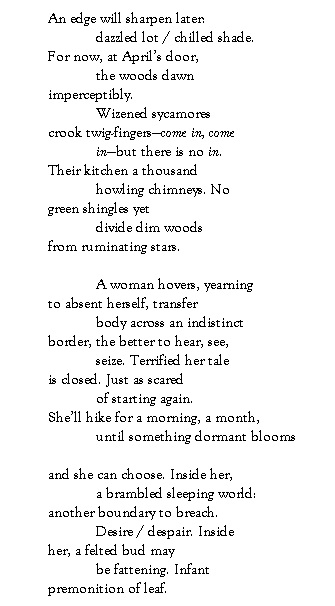 It’s the opening poem, initiating some narrative threads and recurrent images about fairy tales, the Virginia woods in early spring, and what it can be like to inhabit a changing body. Propagation concerns the stories we tell about ourselves at crisis points, and a lot of women I know return to fairy tales to describe their own moments of initiation or transformation.

A few favorites are Parallax by Elizabeth Savage, Darling Hands, Darling Tongue by Sally Rosen Kindred, and Seven Boxes for the Country After by Janet McAdams. On my desk right now are two delicious new ones, Outsiders by Cherise Pollard and Keine Angst by Zayneb Allak.

I blogged here about the historic link between folk tales and chapbooks, but I also find that my favorite little books are in some way about littleness: brevity, children, small fetish objects. I’m charmed when poets pick up thematically on the compactness of the chapbook.

That said, both my chapbooks are long poems or lyric sequences, depending on how you define them, and my influences in that mode are less contemporary. Works by H.D., Langston Hughes, Edna St. Vincent Millay, Gwendolyn Brooks, James Merrill, and Rita Dove have been particularly important to me over the years.

What’s your chapbook about?

On the first of April, a woman walks into the woods. She’s about forty years old and on the cusp of some big decisions; she may also be accidentally pregnant. Weirdness ensues.

That’s easy because I drafted it in order, one poem per day during April, 2014. I was mining Vladimir Propp’s Morphology of the Folktale for writing prompts, and he describes Russian folk tales as possessing thirty or thirty-one “functions,” which seemed like a perfect resource for National Poetry Month. “Absentation” is the first function.

I spent years revising it all, but the seed of each poem remained the same. I wrote these poems in different locations and at different times of day, but I took a lot of walks to ground myself in seasonal changes—what bloomed when, especially. Time acts strangely in Propagation and I wanted it to seem that when my protagonist emerged from her two-hour trail loop, a month had somehow passed.

Which poem is the “misfit” in your collection and why?

Stylistically and formally I tried to keep pivoting—to move in an associative way, as a renku does, in order to complicate an otherwise linear narrative. This means I created a host of misfits: sonnets and list-poems and epistles. The most peculiar one is an exchange of cellphone texts.

Kristy Bowen runs dancing girl press and designs the chapbooks. Usually a cover involves a prolonged negotiation, but this time she just showed me her idea and all I had to do was say “yes.”

If you have written more than one chapbook or novella, could you describe each of them in chronological order?

My very first poetry collection was the chapbook Scholarship Girl, published in 2007 by Finishing Line Press. Its poems became the core of Heterotopia, my second poetry collection, which won the Barrow Street Press Poetry Prize in 2010. Basically, I versified in obscurity for years and years, but after that chapbook, publications started adding up.

My next poetry collection is unrelated to Propagation, but it shares the chapbook’s investments in place and gender. Many of my new poems concern the racial history of the small Southern town in which I find myself, and they also worry over questions of ambition at midlife. My working title is She Will Not Scare, and it’s more or less about turning fifty in what remains of the Confederacy (too much, around here).

Pursue whatever obsesses you, and if that’s writing, do a lot of it. Read everything. Fail often and keep aiming high. But also know that it’s basically impossible to make a living at it, so think about what kind of day job would best support your literary habit. I’m a professor so I’m in the full-immersion camp, but some people are happier in positions that pay the bills but can be left behind at five o’clock. That way your verse or your prose can be thoroughly your own thing; you are beholden to no one. And you’re bringing different perspectives to writing, which is important for the art.

I’d be interested to hear more reflections on how chapbooks are different than full-length poetry volumes—not just halfway points but different creatures entirely. And then there’s the secondary question of how one might publicize them differently. Thank you so much, William, for making space for that!

Lesley Wheeler’s full-length collections are Radioland, The Receptionist and Other Tales, Heterotopia, and Heathen. Her poems and essays appear in Ecotone, Copper Nickel, Crab Orchard Review, and other magazines. She teaches at Washington and Lee University in Lexington, Virginia.

One thought on “Lesley Wheeler”