“the poets I’ve come back to… are those who possess this nearly miraculous ability to write with both tenderness and political fierceness, who look unflinchingly at a system that is crumbling and yet manage to point us towards where the beauty could be.”

What is the relationship between your ethics and your aesthetics? How does your form, content, and style as a writer reflect how you are and are trying to be as a person?

My ethics is one of generous but constant critique (I am, in this sense, extremely a Virgo), and I am constantly trying to bring my aesthetics in line with that ethics. Lately, that has involved my trying harder to write more explicitly anti-capitalist, anti-imperialist poetry—all of the poets I’ve come back to over and over again in the past year or so (Anne Boyer perhaps most prominently among them, although there are so many right now) are those who possess this nearly miraculous ability to write with both tenderness and political fierceness, who look unflinchingly at a system that is crumbling and yet manage to point us towards where the beauty could be.

Sure – you can find poems that will be in the chapbook in various online places (The Recluse, Muse/A, The Mackinac, The Shallow Ends) but here’s one more! 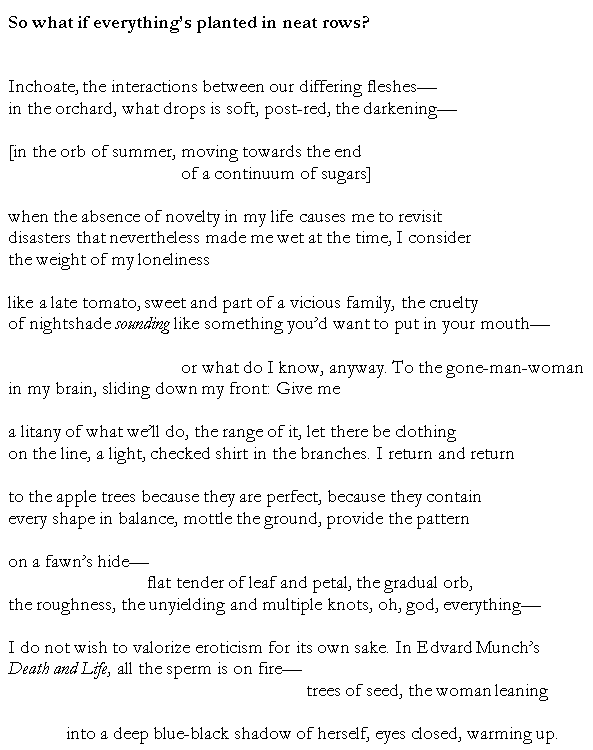 I think it gives the reader a good sense of the way in which I have a tendency, in this chapbook (and probably in the larger thing that I hope it will become) to shuttle back and forth between surrendering to a given bit of imagery and then pulling back from it analytically. Also, the book grapples with questions of sexuality and gender identity, so there’s some of that in there too.

Claire Schwartz’s bound is killing me right now—it’s so capacious while feeling focused, intimate while feeling global, unflinching while feeling like song. It feels like a huge project, even though there are only sixteen poems. I will be reading it many times. I also recently enjoyed Anne Lesley Selcer’s most recent installment of A Book of Poems About Beauty, which came in the form of a chapbook from Gazing Grain Press. Selcer’s work is labyrinthine and bristling with really smart critiques of beauty under capitalism. Also, the image on the back of the book is a message in a bottle that is also a Molotov cocktail.

I’m trying to find ways to be more direct about how screwed up everything is while simultaneously being weirder.

The intensity with which I fall into and out of relationships was what generated the chapbook’s first poems, which were first drafted quite a long time ago—in some cases, nearly a decade ago. The more recent ones are my way—publicly, now, yikes—of announcing that in terms of both my sexuality and my gender, I feel a little like I’m floating in an undefined ether. That’s a tough thing to say when you go through the world looking very much just like a woman married to a man. My embodied experience, in other words and in general, is not one of social struggle. The struggle is internal, and that’s what these poems try and get at.

The title comes from that “undefined ether” thing, and also because I am most attached to the series of poems all called “She said between” that punctuate the book. Arranging poems is something I always have lots of trouble with; I try to figure out how many arguments I’m making and then arrange the poems such that those arguments become recursive. So you’ll see a theme (e.g. marriage) come up, and then disappear, and then come up again at fairly regular intervals.

Do you have a favorite revision strategy? What is it?

I’m a “blank page” reviser—I can’t tinker with extant drafts because I won’t do enough work on it. I need to start over. So I’ll have the draft on one side of my screen, and a blank document on the other, and I’ll rewrite from scratch (I don’t handwrite). So my poems have a tendency to change radically from draft to draft.

Finishing Line Press is a press that has an admirable ethos—make a lot of poetry available every year—but that of course means that editorial attention has been somewhat spare. I was very fortunate to have been awarded their New Women’s Voices prize, which means that publishing the book won’t be a net loss for me! As for the cover and typesetting, it was all the work of Erik Freer, a former grad school colleague of mine and a brilliant Brooklyn-based designer. I couldn’t have asked for a more attentive and thoughtful artist for the chapbook.

I’ve recently finished a full-length collection about racial bifurcation (literally everything about me is bi, I have no idea) which will, with any luck, appear in the world at some point. I’m also working on a collaborative book of poems about a sea witch with the poet and novelist Sarah Blake. That’s been a ton of fun. I’m also a literary critic, so I have a scholarly book in the works that is about academic discourse in experimental American poetry.

I wish I had a healthier social media strategy—Twitter makes me feel both comforted and completely insane simultaneously, so I don’t really know what to do about that. (The best tweet about Twitter is the one where it says “Twitter is great if you can’t afford therapy, but you also don’t want to get any better.”) I try to keep my head down and read the books (be they books of poetry or scholarly books) that are doing the work, and then do the work.

Kimberly Quiogue Andrews is a poet and a literary critic. She lives in Maryland and teaches at Washington College. Author photo by Rachel Engel.