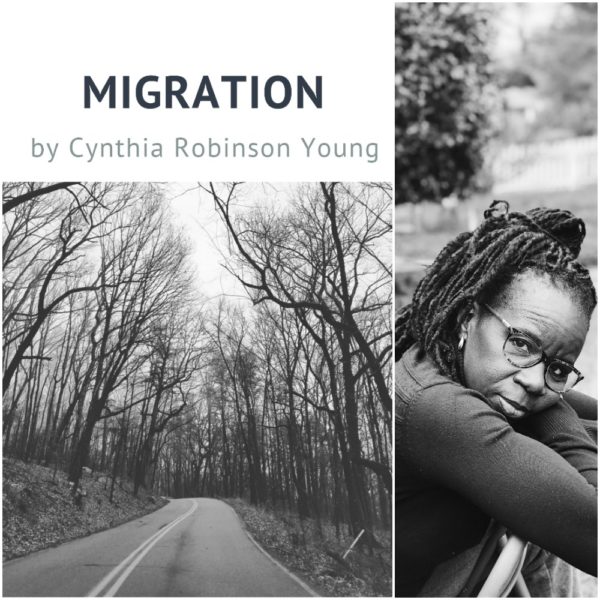 Could you tell us a bit about your growing up and your path to becoming a writer?

I grew up in Newark, New Jersey. I’ve been writing since I was a teenager, was in honors English, minored in English, moved to Berkeley and was part of the writing scene there, learning from great African American writers such as Wanda Coleman and Alice Walker.

How do you decorate your writing space?

What is the relationship between your ethics and your aesthetics? How does your form, content, and style as a writer reflect how you are and are trying to be as a person?

I write in a prose-y style in which I attempt to make my work as accessible as possible to those who think they hate poetry. I became a poet because of poets like Nikki Giovanni, who wrote poetry I could relate to and understand.

We don’t see a shadow unless it’s already been cast.
We saw our elders passing through the Valley of the Shadows,
the Shadow of death. We smelled decaying flesh, saw
bloated bodies. We recognized them nonetheless,
our mothers and fathers, our aunts and uncles, our babies unborn.

The ocean Atlantic was transformed.
It is the River Styx, running crimson, running
blood Red. We see their reflections in the water.
We want to turn away.
We cannot. We have to look.
We have to
see.

Charon is disguised as Slave trader,
captaining the Middle Passage. He has stocked the ship
with desperate souls. We are praying for ascension, to fly,
But if not to fly, to die and be lifted
up and away. We pray
for death descending. We fling
the only thing left. Do we not own our lives? We fling them overboard,
into the warm water grave. The waves wait patiently
for us. The rest of us remain below,
buried in the bowels of the ship’s living hell.
……
While George Washington was forging a new nation,
our elder parents were birthing the firstborn of our American family.
Her name was Egururu.
Our blood runs through Nigeria, Cameroon, Ghana, Cote D’Ivoire,
and here in America.

Through tobacco and cotton fields, through thick and thin treed forests
our elder father, our elder mother, they found
each other, their bodies, their spirits came together,
warming the North Carolina soil.

It was here that Egururu was born
and given the only gift she could keep—her name.
Not caring about the gift, her master gave her his chosen one
and she was reborn Charity
without even a surname until she married and
became a Gatling only because her husband
was owned by one.

My name is Egururu,
No matter what they call me.
When you say my name, you tell my story.
So she told all of her children about the Shadows,
and we repeated it to our children, and so on,
and so on. And now,
come closer…
for we are telling it to you.

It is an introduction to what the work is about—the story of the first person on the paternal side of my family that we know of whose parents migrated here from West Africa.

I don’t usually read chapbooks because my favorite poets have full-length books!

What obsessions led you to write your chapbook?

I wanted to write a story about my family’s migration, and tell some of the stories they told me, as well as stories that I created while reading about them at Ancestry.com

The poem that inspired the rest of the chapbook is entitled “Nancy Beal: 1820.” When I found her on Ancestry.com, I was so excited! She was the one who got me wondering about the rest of the stories of my ancestors who had no voice. I wanted to try to give them one in my chapbook.

It is divided by generations, and  then the title just describes what it’s really about.

Which poem in your chapbook has the most meaningful back story to you? What’s the back story?

Probably “Legacy” means the most. It’s about my father, who passed away when I was 9 years old. It’s also an old one, but I wanted to include it because I love it.

What was the final poem you wrote or significantly revised for the chapbook, and how did that affect your sense that the chapbook was complete?

The last poem I wrote and kept working on is the “ Epilogue: Migration.” It is my last word and I wanted to get it right, so I kept editing it to try to tell the truth and leave my own soul feeling satisfied.

I’m working on a chapbook about being in a family of males. I’m concerned about them being endangered right now. I have five sons, and eight grandsons, and it’s scary out there for Black males.

How do you contend with saturation?

I write a lot about what I hear in the news that concerns me. If it haunts me, I write about it. But I have to turn things off. I get in a loop and find I’ve been on Facebook for an hour and I don’t have an hour to be on Facebook!

Take classes, workshops. Learn how to write. Join a writing group so your work can be critiqued.

Cynthia Robinson Young is an adjunct professor and a graduate student in Creative Writing. Her work has appeared in numerous journals including Poetry South, Sixfold, and Catalpa, and has been anthologized in two volumes of Across the Generations and the forthcoming Waves. She is the author of  the chapbook Migration.

I have an author’s page on Amazon.com where my book is being sold.