“I find more life and truth in the not knowing.” 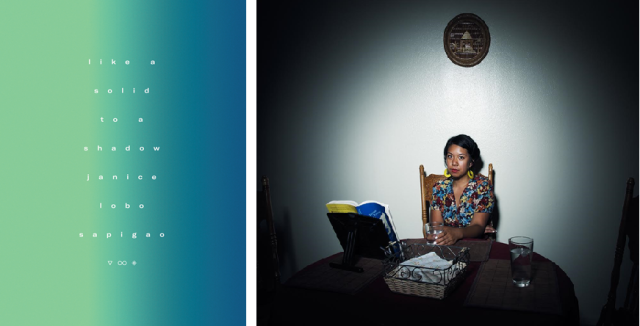 like a solid to a shadow (Timeless, Infinite Light, 2017)

I can think of four at the moment; the second is a set of chapbooks:

What might these favorite or influential chapbooks suggest about you and your writing?

I think these books reveal that I appreciate and like to read work by writers who push form, raise political stakes in their writing and processes, and push back against English to point out its flaws and shortcomings. My writings work here, as I think that speaking and writing in English is a series of failures. But I don’t stop at failure–I believe in pushing through what doesn’t work while pointing it out.

What obsessions led you to write your book?

I like the word ‘obsessions.’ To me, this means focus, or adjusting your lens to center on one thing or a few somethings that are related somehow. And then you’re searching, somehowsomehowsomehow and it becomes a thing. That somehow is my father. The thing it became during obsessing is a book. The writing was the search beyond the act of seeing and privilege/sense of sight.

What’s your book about?

My book consists of several threads: 1) genograms that my brother created when he was in grad school (genograms help track genetic diseases and hereditary traits over generations of a family); 2) learning Ilokano in poetic bursts, a narrative of reaching out to people, or having people reach out on their own, and finding dead ends; 3) transcribed and translated Ilokano-English text from my deceased father’s spoken love letters recorded on cassette tapes in the 1970s, 4) verse poetry meditating on loss but love, 5) prose reflections on the process of writing, and 6) quotes from other places that I’ve kept or held onto.

The ‘neat’ themes–that is, the ones that create order for legibility–are fatherlessness, learning and unlearning Ilokano and English, and grieving–like, really, really diving into the grief and landing and not.

How did you decide on the arrangement and title of your book?

I chose not to have an order, but maybe that’s a form of order. I chose to splice the narrative to enact a reading experience that I’ve commonly read in most documentary poetry, which is to create textual disorientation that provides a fuller sense of the space that content inhabits. This allows for more room for anomalous ideas and a look into the narratology of the work. In it, I can include things that don’t necessarily belong together at first, second, or third glances. I’m into the idea of having things that don’t belong work together to present an unnamed or unknown something.

I’ve been thinking about undocumentary poetics, and how like a solid to a shadow does this, too. My first book, microchips for millions, did well to arrange poems in the form of microchips, and it also pulled from documents like newspapers, news headlines and clickbait, conversations, scholarly books and articles, informal interviews, investigative journalism, memories, my own journals and diaries, and business reports. With like a solid to a shadow, I am pulling from things that are documented, but I also hella question the validity of documents, and I even ask, “Does a record make someone exist?” I don’t know if this logic is sound: if a record exists, then the person exists. If the record doesn’t exist, then the person doesn’t either. I find more life and truth in the not knowing. We need to know more, right? Like a solid. Who made the record? If the records were lost in a fire, then was the person lost, too? Does the record not existing after being burned in a fire mean now that the person never had a record? That they never existed. Maybe they did. To a shadow. The shadow is there because the solid is there. But I’m not looking at the shadow, because I know it’s there. What if the solid is uncertain, or faulty, or afraid, or invalid in someway. I look there.

Which section in your book has the most meaningful back story to you? What’s the back story?

The most meaningful parts are the cover and the colored photos, because of how the visuals have been treated with such dignity and respect from my publisher. All praise my amazing publisher, Timeless, Infinite Light. They are a stellar crew to work with, I love everything queer and punk and radical and loving and naked about them. TIL is the future herenow. They ensured the form of the book matched and deepened the content. Doing that, to me, is equivalent of having (a) dope ass partner(s) who see your 100% and meet it with their 100%.

Which piece is the “misfit” in your collection and why?

I think there are two: I wanted to add more transcriptions/translations & links on the audio (à la Jonathan Stalling’s Yingelíshi) from the tapes, but I just couldn’t do it. Listening to the tapes takes a lot out of me emotionally, and I was only able to get one whole tape in the book. I purposefully left myself room to continue the project when or I’m ready for serial work. The text itself is central, but the singularity is perhaps the misfit.

Another misfit is the singular email I included from the Veterans’ Records Department. It was incredulous just how unhelpful they were. It’s laughable, especially when I read that poem out loud. It baffles me just how much they filled an email with so much text, but ultimately and truly offer no significant information.

Is there a question you wish you would have been asked about your book? How would you answer it?

I think I need more answers. The book itself is so full of questions, most are unanswerable in some way. I guess if there is a question, it’s: How do you feel now? (Now that the book is out, now that’s being read or not, now that you can let go a bit?)

I feel okay. I feel better. I dreaded reading the book or reading from the book because of how fucking sad it is. I remind myself that it’s joyous work, too, and that it is beautiful beyond what I could have asked for. I guess asking doesn’t always contain an urgency to know for me. Asking is a start and a stop.

I’m working on revising separate manuscripts in these genres: fiction (a young adult novel), poetry (a third collection about skin), and non-fiction (an essay collection). I’m excited for all three, and I’m at a point where I’m in between all three.

My goal is to have the YA novel out (as in out of my hands and maybe into the hands of an agent or publisher) within five years, but that clock has started already.

Oh, and I have a chapbook coming out from dancing girl press in the spring or summer of 2018. Some of the poems in it will be from the manuscript about skin.

If you could choose another artistic path (painting, music, dance, etc.), what would it be and why?

I think I would be a filmmaker. I admire my filmmaker friends and I don’t think I have their stamina, but I am a very visual and observant person.

What songs soundtrack your making of your book?

Janice Lobo Sapigao is a Pinay poet, writer, and educator from San José, CA. She is the author of two books of poetry: microchips for millions (Philippine American Writers and Artists, Inc., 2016) and like a solid to a shadow (Timeless, Infinite Light, 2017). She is also the author of two chapbooks: you don’t know what you don’t know (Mondo Bummer Books, 2017) and toxic city (tinder tender press, 2015). She is a VONA/Voices and Kundiman Poetry Fellow. She is the associate editor of TAYO Literary Magazine. Her website is janicewrites.com. Author photo by Anjelica Jardiel.

review of like a solid to a shadow in metroactive

“A Map of The Philippines”